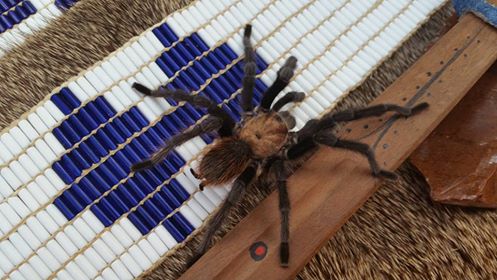 Wampum is an Algonquian word that translates roughly to white shell beads.
Historical wampum are small, cylindrical, white and purple beads.
Historical wampum beads were used for decoration and for trade by natives living in the coastal New England
region where the shells used for making the beads were found.
In the early 1600s European traders and settlers began to use wampum beads as money. The shells replaced European
currency which required gold and silver not readily available in “the New  World”.

Wampum and the Cherokee

The use of wampum as currency was spread through the fur trade to the Iroquois in the northeast
and the Creek and Cherokee in the southeast.
The word for money in Cherokee is atela/atsela/adela (dialectic differences).
This is also the word used for bead (Mooney, 488).
Wampum was instrumental in diplomatic affairs. Native confederacies, such as the Iroquois,
the Creek, the Cherokee, exchanged strings or belts of wampum to solidify negotiations.
When Cherokee men visited other tribes such as the Iroquois, they often took wampum belts made
by Cherokee women as a gift (and sign of peace) for the Iroquoian women (Perdue, 93).

In towns of the Cherokee confederacy people gathered annually to hear the tribal orator, a priest who was sometimes called "the beloved man" recite the common law of the confederacy. "When the orator spoke the law", he was reading the meaning of history and tradition contained in the tribal wampum. He held the ancient and sacred wampum belts in his hand.

How do wampum belts function as material rhetoric?

Wampum belts continues to be used as mnemonic devices, legal documents,
and historical communicative devices.
Each belt signifies a particular event. The beads convey a speaker’s words and can
be translated for a particular meaning.

How do belts communicate?

The meaning of the belt must be publicly performed in order for its
message to be properly disseminated.
Used outside an official cultural event, negates the
validity of a belt’s message.

By 1808 Cherokees were able to use Sequoyah’s method of writing in syllabary to translate
their laws into a written and readable language.
“In the ninety years between the adoption of the first written law (l808) and the abolition of tribal courts (1898) wampum was supplanted by more than a million pages of legal transcripts and printed material. By 1896 the Redbird Smith-Keetoowah movement of the Cherokees acknowledged that understanding of the wampum had been lost, and recovery of these ancient laws became one of the cornerstones of [traditionalist] revival".