Meeting called to order by Speaker of Council White Crow
Prayer led by Chief Grey Elk
Pledge of Allegiance led by Speaker of Council White Crow
Roll Call of council by Tribal Secretary Buffalo Sister
Fast Knife--------------Absent
Standing Rock--------Here
Hawk Arrow----------Absent
White Crow----------Here
Buffalo Sister--------Here
Grandmother Rose-Here
Wandering Wolf----Here
Deputy Chief Tawny Eagle---Here
Chief Grey Elk-------Here
Chief Grey announced that the electric company fixed the wiring at the top of the pole and that Tina Two Horses donated the money to pay for it.
Plans are coming together for the pow wow to be held June 25, 26 and 27, 2021.
Donations of water, electric wire for rewiring outside, construction trash bags are among some of the items being donated. Still in need of paper towels, 30-gallon trash bags, soda, toilet tissue, waxed coffee cups with lids and cash donations are always a big help!
Tina Two Horses donated a large safe to the Nation.
Busy Red Bird announced the land loan is down under $14,000.00.
Bank balance is at $2600.00
If you want classes on Clan system, please see Deputy Chief Tawny Eagle.
At the time of the meeting, it was unknown if Clinton, Missouri was going to have their 4th of July parade.  We now have an UPDATE! Parade will be July 3rd and plans are being made for us to join in.  Please wear Native American Regalia or a Northern Cherokee Nation T-shirt to walk in the parade.
UPDATE THERE WILL BE A COUNCIL MEETING ON JUNE 12TH AT 10:30AM TO FINALIZE PLANS FOR POW WOW. MARK YOUR CALENDARS.
Consent agenda was read by Speaker of Council White Crow
Wandering Wolf Motioned to accept
Grandmother Rose 2nd the motion
Council Passed
Winner of the door prize was Tabitha Spirit Wind Rider
White Crow gave the blessing on the food and prayers to all those who have sick and lost members of their families.
Potluck dinner was shared by all

​Northern Cherokee Nation
March 13, 2021
Council Meeting
Meeting called to order by Speaker White Crow
Pledge led by White Crow and a small visitor Malaki
Chief Grey Elk led the opening prayer
Roll Call of council:
Fast Knife------------Absent
Standing Rock------Present
Hawk Arrow--------Present
White Crow---------Present
Buffalo Sister-------Present
Grandmother Rose-Present
Wandering Wolf—Absent
Deputy Chief Tawny Eagle-Absent
Chief Grey Elk------Present
Chief Grey Elk recognized citizen Laura Cantu. She is a student learning the ways to help the people with emotional and mental stress and how to deal with it.
Abraham Clark announced that he is helping to work on an American Indian Center in Springfield, Missouri.
Busy Red Bird announced as of March 2021 we are down to $14818.47 on our loan! Great strides have been made to get this finished once and for all!
Running Wolf announced it is getting time to mow the grounds again and we can use some more volunteers for this task. He has also acquired some garage doors for us and needs volunteers to help get it installed.  Electric work needs to get started on the grounds for the pow wow June 25, 26, 27 2021. Please get with Running Wolf to schedule what days you can help.
All visitors were welcomed.
Chief Grey Elk announced he and Busy Red Bird will be going to a venue in May to talk about the Northern Cherokee Nation. Will have artifacts on display, as well as selling some of our Nation items.
We are looking to purchase heavier Flags for our poles. The wind works on them and tears them. The flags will be flown on Council Meeting days and during powwow only, to save them from destruction.
Need donations for the last fill up of fuel.
Fire Keeper announced he would like to start the Sacred Fire on the 24th of June for the powwow.
Speaker White Crow read the agenda, Grandmother Rose 1st, Hawk Arrow 2nd and council approved.
Elder Council Woman Gentle Rain encouraged all and started the donation for fuel and flags.
Council Meeting adjourned with closing prayer
Pow Wow is set for June 25, 26, 27, 2021 Please help to get ads sold and get the word out to all your family and friends. A flyer will be available shortly.

June 13, 2020 Council Meeting
Meeting called to order by Speaker of Council White Crow
White Crow lead the pledge of allegiance to the United States Flag
White Crow gave the opening prayer.
Roll call of current council
Fast Knife----Here
Gentle Rain—Here
Hawk Arrow—Here
White Crow---Here
Buffalo Sister---Here
Grandmother Rose---Here
Chief Grey Elk then swore in Daniel White Crow as Speaker of Council until March of 2021.
Speaker of Council then swore in the following council members to serve until March of 2021.
Fast Knife, Gentle Rain, Hawk Arrow, Buffalo Sister, Grandmother Rose, Wandering Wolf, and Billy Boyce.
Chief Grey Elk announced there will be a small cookout at Hawk Arrow’s place the fourth of July and all are welcome.
The calendar of events has some changes on it due to the virus. Next council meeting is July 11, 2020, camping out is open this weekend, classes to be held, family time, possible fireworks. September Pow Wow has been rescheduled until June of 2021. There will be a council meeting held September 12, 2020, with camping out available and a chili potluck dinner. Chili being made by Buffalo Sister.
The vote on the exact dates of Pow Wow in June of 2021 has been tabled to the July 11, 2020 council meeting.
Hawk Arrow stated that the lawyers are still working on the case. With the virus, everything has been put on hold in the court system.
Calm Spirit announced that the website has been paid by her for the next year! Wado for your contribution Calm Spirit!
Wandering Wolf is organizing a fundraising of a self defense class. All monies will be donated to the Northern Cherokee Nation.  Please see Wandering Wolf if you are interested.
Busy Red Bird gave the financial report. The insurance for the property is paid for the next year. Donations are down some. The best news is that the loan on the place is now down below $20,000.00 We are almost there!
Running Wolf announced that the 4 flags poles will be set today. He asked for volunteers to help and help they did! Many thanks to Billy Boyce for the donation of equipment and concrete to get this accomplished.
Buffalo Sister announce that there will be classes and teachings on how to make your regalia on a budget. These classes will be held after council meetings for those that are interested.
Buffalo Sister also announced that we are currently sold out of Northern Cherokee Nation flags.  We are requesting donations for the purchase of more.
Chief Grey Elk stated that the Book of Legends is almost complete.
Gentle Rain is holding a raffle for a knife donated by White Crow. Tickets are $5.00 each. The drawing will be held at the September meeting. You do not need to be present to win.
Speaker White Crow called for motion to adjourn.
Gentle Rain—first motion
Wandering Wolf—second motion
Council Approved
White Crow gave the closing prayer. Potluck dinner shared by all.
Osiyo Citizens of the Northern Cherokee Nation,

Today was the first council meeting of our new year and I want to thank each and every one who made the effort to attend. Many of you like the Chief, Deputy Chief and most of the council drive between 3 1/2 and 5 hours to attend our meetings, they come from all four corners of Missouri, Arkansas, Kansas , Oklahoma. It was great seeing our family. We even had a photographer from the L.A. Times.

My question to you is WHERE WERE THE REST OF THE NORTHERN CHEROKEE CITIZENS? I know that we have close to 10,000 enrolled that live in Missouri alone! We all have lives and families, but what do you consider your NCN family? Are we not important enough to take one Saturday a month and join your tribal family? Do you not want your children to know where they come from? Are you ashamed to let your neighbors and co-workers know your Cherokee? Think about why you joined the Tribe, was it because a family member signed you up? Do you think your going to get something from the white government? Or are you afraid you might have to contribute some time or heaven forbid money to your tribe? Think about this!

We have citizens that live in other states that call, donate and keep in touch. WHAT IS YOUR EXCUSE, Is it because you remember the horror stories from your great grandparents that is was illegal to be an Indian in Missouri, WELL GET OVER IT THIS IS 2019. CHEROKEE UP PEOPLE!
This letter is for all our citizens, not just Missouri. Because you live in another state You are not exempt!
We are a proud people, but it takes EVERYONE EVERYWHERE to make a family!
May Creator keep us all safe.
Busy Red Bird.

Swearing in of council members.

Great council meeting.
Beautiful wedding of Buffalo Sister and Bobby.
December, 2016
Wow what a great time we had today. A great and productive council meeting, awesome food and delicious deserts. Our tribal family continues to grow and become more involved. Your Chief is so happy with the cooperation and willingness to get involved. MERRY CHRISTMAS, AND A HAPPY AND BLESSED NEW YEAR!!! SEE you all next year, February 14th.

The Northern Cherokee Nation continues to work for the people...it's citizens.
Pictured above are photos taken during the May council meeting of the Nation.
The meetings are open to citizens, family members and interested community members. 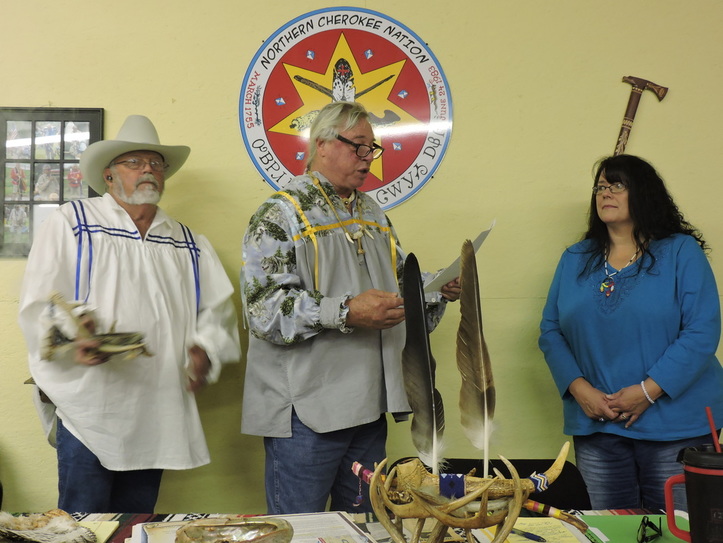 Photos from the Northern Cherokee Nation
Council Meeting on June 14 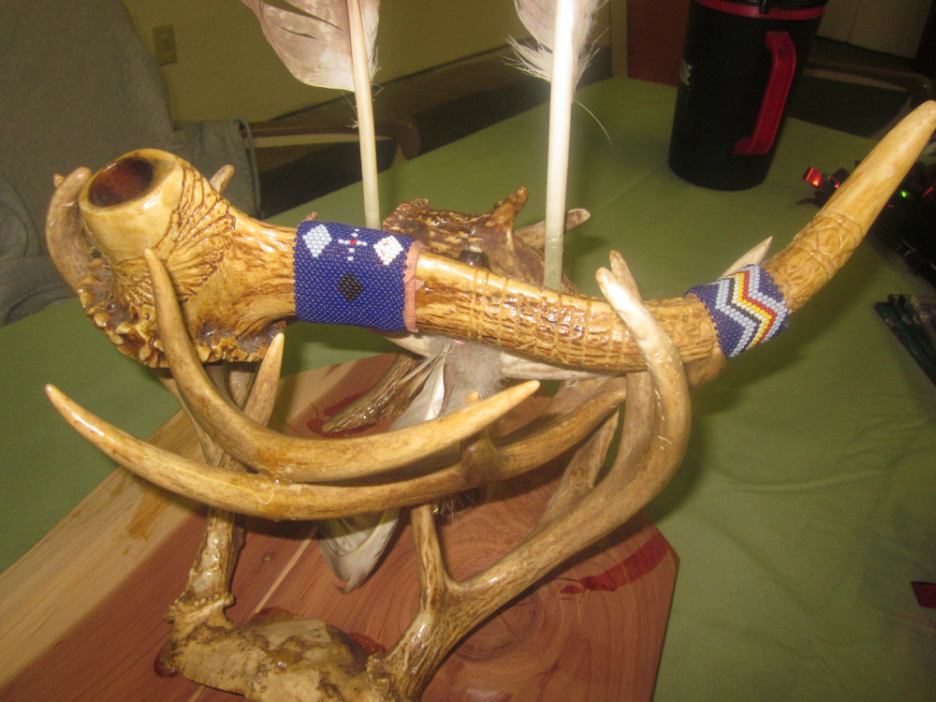