Cherokee Native Americans and Their Descendents - Descendants
The following post was on the CHEROKEE NATIVE AMERICANS AND THEIR DESCENDENTS post on Facebook.  We thought it was worth sharing.  If you have thoughts or comments, feel free to email those to:   northerncherokeenation@gmail.com.
--  The Northern Cherokee Nation


Some Folks Ask About This, so here goes:

We all know the drill taught in schools for the last 200 hundred years. We all crossed over the Bearing Straight from Asia about 8 to 10 thousand years ago. Despite archeological evidence dating some of us back to 35 thousand years and carbon 14 dating going back even further, this goofy theory is still being taught in schools. Ok fine, these very well compensated experts have their theory’s, and so do we. Who better to present theories about our history than us? Instead of conjecture, and paycheck driven theory, how about old Cherokee legends. The experts know very little of our old legends. They make common sense to us. Our whole world is driven in many ways governed by COMMON SENSE. One of our legends tell us that when “Unegas” whites, are faced with common sense, they will resist. If common sense is forced on them, they will violently rebel. Ok fine. Enough about that.

Some of the early legends say that the Island we lived on MAY BE off the east coast of Brazil, was being attacked by a vast number of warriors from the main land of South America.  When they looked down on us from the mountain peaks, they observed that we lived in buildings that went into the clouds. After secretly observing us for some time they determined that we had weapons of unimaginable power. This will be discussed in another legend about one of our early peace belts. Their leader called off the attack telling his warriors that if we were attacked, we would destroy all of mankind. This legend ends there. The next legend begins with our island being destroyed by a volcanic eruption. We built huge log rafts and 14 of the clans escaped. More about the number of clans later. Legend says that we came ashore somewhere on the east coast of Central America. Personal interviews with Mayan Priest indicate that we “dwelt” with them for “a time” and then traveled to a place called Canyon De Shelly. We lived there for a time and then for reasons no one knows, we left this place leaving no trace of our culture, and returned to the country of the Mayans, where according to them we “dwelt” with them  for another “period of time” and then departed toward the Northeast.  From here on our legends take over from the Mayan Legends. If any of you doubters have the nerve, go “talk” to some Mayan Priests discover how much more they know about our clan system that we do. “OR” how little do we know about theirs.

This ends this part of chapter 1 of the origins of Cherokee history. Much more on chapter 1 later. Chapter 2 on our history in North America will come soon. Please remember this. What we have presented here is based on ancient legends. We are in sole possession of most of these legends. Much of this story comes from old manuscripts written on everything from bark parchment, cane writing, old rolled up sections of wagon canvases and only translated from Cherokee into English in the last 200 years. Just one more thing. Sequoya did not invent the Cherokee form of writing, but he did a miraculous job of modernizing it. In the old times only, the Priest could read and write. It was forbidden for anyone else. Copies of the 91 to 104 symbols of what is now know as the old script still exist. We have these. Several groups out there can write and converse in “Old Script.
We know that bringing some of this old knowledge back to light will probably upset some the old elders and of course the all-knowing scholars but this does not belong to them. This belongs to all Cherokee’s.  The authors of these writings will stay anonymous for now or until they decide otherwise.
Kenn Grey Elk
Da Na Da Go Huh i

Now on to something more interesting, like making sure your nation survives in the next century. We keep track of as many Cherokee groups as we can. Many of these groups fail for lack of support of their members, most lack any records of their culture or history, some get absorbed by other groups and simply fade away. We are very blessed to have preserved many of the old writings, records, medicine books, ceremonies, and the only complete record and information on the clan system. Very few groups can even agree on how many clans there were or are now. What is all of this worth to you? We have existed in the past by a few dedicated donors, but we need more. WE need all of you to donate. With property and building insurance, improvements to your grounds, utilities, office supplies, postage and much more. We must have a dependable source of monthly income.  I have asked before that you donate the cost of a Big Mac meal $ 10:00 once a month, I am asking again to sustain your Nation into the future.
REMEMBER, WE RECEIVE NO STATE OR FEDERAL FUNDING AND ALL OFFICE STAFF (1) ARE VOLUNTEERS.
​Show pride in your nation, your pride in the fact we have survived 275 years as a separate group that refused to sign peace treaties or give up any of our land without a fight. We have survived the Indian removal acts signed by the Missouri legislature, which meant being shot or hung in the middle of he night or removal to “Indian Territory” Oklahoma if we survived. We have withstood vicious attacks from other Cherokee tribes who claim we are appropriating a culture they barely know anything about. We still, currently, are in conflicts with Missouri law makers on several issues and yet we do and always endeavor to persevere. Hang in there with your tribe. Enjoy this fight, Support your Nation. Remember we fight for you.
We have PAYPAL for your convenience, or if you wish you may send a generous check made out to NCN and mail to NCN, P.O. Box 413, Cuba, MO. 65453
NCN Deputy Chief Tawny Eagle Letter to the Nation   March 20, 2019 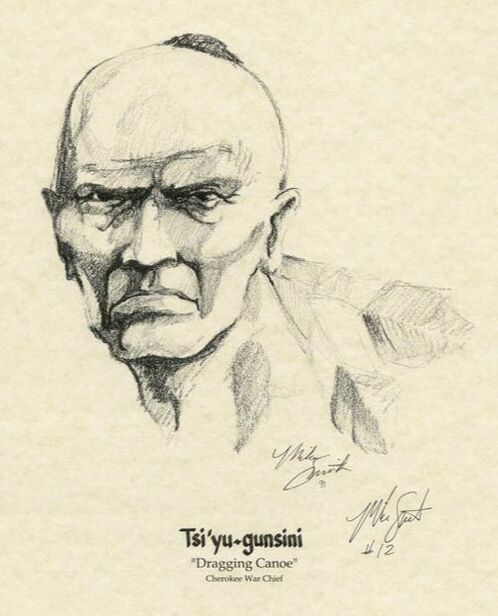 "Whole Indian Nations have melted away like snowballs in the sun before the white man's advance. They leave scarcely a name of our people except those wrongly recorded by their destroyers. Where are the Delawares? They have been reduced to a mere shadow of their former greatness. We had hoped that the white men would not be willing to travel beyond the mountains. Now that hope is gone. They have passed the mountains and have settled upon Tsalagi (Cherokee) land. They wish to have that usurpation sanctioned by treaty. When that is gained, the same encroaching spirit will lead them upon other land of the Tsalagi (Cherokees). New cessions will be asked. Finally the whole country, which the Tsalagi (Cherokees) and their fathers have so long occupied, will be demanded, and the remnant of the Ani Yvwiya, the Real People, once so great and formidable, will be compelled to seek refuge in some distant wilderness. There they will be permitted to stay only a short while, until they again behold the advancing banners of the same greedy host. Not being able to point out any further retreat for the miserable Tsalagi (Cherokees), the extinction of the whole race will be proclaimed. Should we not therefore run all risks, and incur all consequences, rather than to submit to further loss of our country? Such treaties may be alright for men who are too old to hunt or fight. As for me, I have my young warriors about me. We will hold our land."
Tsiyu Gansini (ᏥᏳ ᎦᏅᏏᏂ) “He is dragging his canoe” Dragging Canoe

The NCN is a non-profit organization and state recognized tribe composed of approximately 14,000 people of Cherokee descent. Most NCN are descendants of those Cherokees who did not emigrate into Indian Territory (present-day Oklahoma), some of which emigrated prior to the Trail or Tears when the Cherokees were beginning to be pushed west of the Mississippi.